One of my favorite song lines is from the original Dr. Dolittle movie. Matthew is singing to young Master Stubbins, and one of the lines goes: “I know that what the Doctor tells me isn’t all together true, but I love every tale he tells me. I don’t know of any better ones, do you?”

I think Matthew hits the nail on the head. The stories might not be true, but they are really good stories.

Most of us adults think that kids and imaginary magical worlds are fun stuff, but when we are adults we need to be based in reality and as adults we undoubtedly know what reality is.

On the contrary, I think kids have a much better sense of reality than we adults do.  After all, most kids know when they are playing, make believe, don’t they?

We adults tend to get a bit confused on this. Think of the ancient mystery cults, for example, or the idea of divine right of kings whereby the king ruled because God said so.  A lot of adults used to believe this stuff. But surely we have got it all sorted by now right?

Modern business-people and lawyers are, in fact, powerful sorcerers. The principal difference between them and tribal shamans is that modern lawyers tell far stranger tales.

Yuval Harari gives as an interesting example: What about those Wizards called lawyers?  They write the correct spells on a piece of paper and get them signed and stamped with magical stamps and Poof! A corporation exists where there wasn’t one a minute before.  And then possibly a few years later an even more powerful wizard called a Judge decides she does not like the corporation so she has her cort scribe create another magical document and she signs it and puts her magical stamp on it and… Poof!  The corporation no longer exists!

The people who were employees are still there, the suppliers, customers and even the former shareholders are still there.  The equipment and the building are all still there but the corporation is gone!  Very magical thinking and unlike the kids we don’t even know we are doing it.

Another song that comes to mind is the song co-written by Kenneth Ascher & Paul Williams called The Rainbow Connection.  You know the one Kermit sings while sitting on a log.  Why are there so many songs about rainbows?…Rainbows are visions but only illusions, and rainbows have nothing to hide…Somebody thought of it and someone believed it, and look what it’s done so far!

Maybe Conscious Capitalism is about doing some magic in the mythical world of capitalism and making it a better story.  If some of us think of it and more of us believe it imagine what it can do!  After all, since capitalism isn’t altogether true anyway I think we need a better story, don’t you?

TELL US WHAT YOU THINK! Leave a comment on this blogpost or email us at info@consciouscapitalism.org 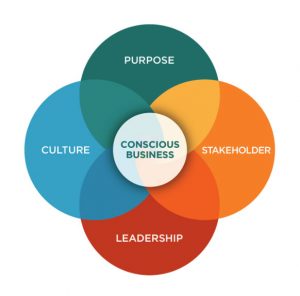